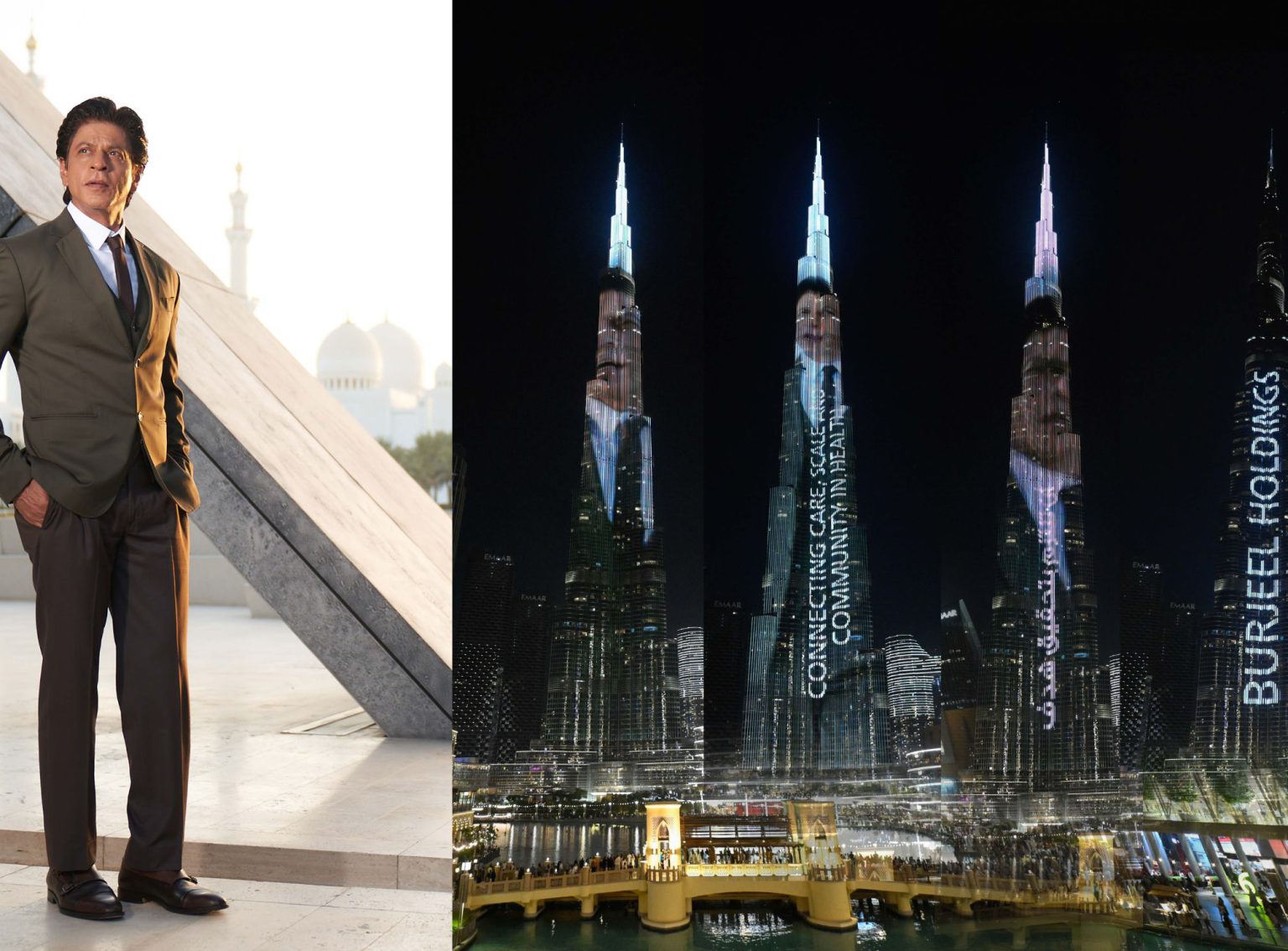 The Burj Khalifa lit up with a brand campaign for Burjeel Holdings featuring the Indian superstar.

Dubai: A month ahead of his birthday, Indian actor Shah Rukh Khan lit up the world’s tallest building, The Burj Khalifa, on Wednesday evening, in a brand campaign for the UAE-based conglomerate Burjeel Holdings.

The glittering moment marked the launch of an integrated brand campaign by Burjeel Holdings, one of the largest healthcare service providers in the UAE. Shah Rukh Khan is the face of the group that owns 39 hospitals and medical centers under the Burjeel, Medeor, LLH, Lifecare, and Tajmeel brands in the UAE and Oman.

The campaign launch event highlighted Shah Rukh Khan’s strong connection to the UAE. For the past few years, on Shah Rukh Khan’s birthday, the Burj Khalifa has lit up in honor of the superstar.

The campaign, ‘We Are Committed To Your Care’, which is set to appear region-wide on multiple platforms features the Abu Dhabi-headquartered healthcare powerhouse’s homegrown success story. The theme of the campaign highlights Burjeel Holdings’ unparalleled passion and its commitment to serving the community in this region and beyond. It is based on the group’s vision of connecting care, scale & community in health.

At 8:20 pm, the world’s tallest screen cast a glow on Dubai’s cityscape as it screened the campaign video in which the actor narrates the inspiring story of the healthcare group. The video begins with Shah Rukh Khan’s tribute to the UAE’s heroic martyrs at the national and cultural landmark of Wahat Al Karama. The 1:10 minute video also showcases the iconic Sheikh Zayed Grand Mosque and the group’s flagship facility, Burjeel Medical City.

“Sheikh Zayed Grand Mosque and Wahat Al Karama depict the essence of the UAE and reflect Abu Dhabi’s growth into a global hub. The video draws parallels between the ideals that inspired these landmarks and Burjeel Holdings’ ethos of serving the community,” said Mr. Prashant Issar, Director of the campaign video, who also directed the Dubai Tourism campaign featuring Shah Rukh Khan.

On the occasion of the launch, Dr. Shamsheer Vayalil, Chairman of Burjeel Holdings, said, “We are proud to launch the campaign with superstar Shah Rukh Khan that epitomizes the values we cherish. It symbolizes Burjeel Holdings’ ambition to become a global leader in healthcare based out of a country that has inspired the world with its fascinating growth story.”

Founded in 2007, Burjeel Holdings is one of the leading private healthcare services providers in the UAE with a growing presence in Oman and the GCC. With a network of 61 assets, including 39 hospitals and medical centers, as well as pharmacies and other allied services, the Group provides the highest standard of patient care in the region. Burjeel Holdings’ brands include Burjeel Hospitals, Medeor Hospitals, LLH Hospitals, Lifecare Hospital, and Tajmeel. It has 12 JCI accredited facilities, with a total 1,660 patient beds across its operations in UAE and Oman and holds a leading position in the UAE. The Group has comprehensive cancer care facilities in the UAE and is the country’s leading mother and children’s healthcare provider. The Group continues to set new benchmarks for healthcare in the region with state-of-the-art facilities and world-class service standards. With a team of highly experienced, world-class practitioners, Burjeel Holdings is committed to driving innovation and bringing the latest advances in global healthcare to the region. For more information visit: https://burjeelholdings.com/